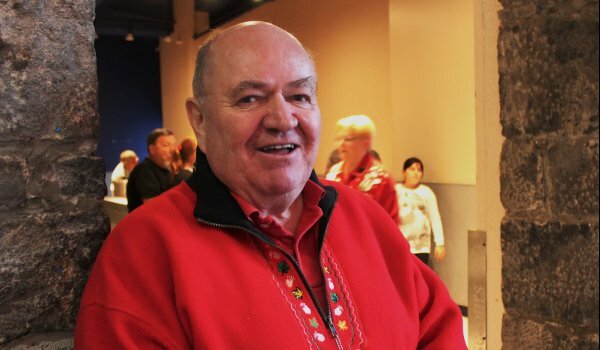 More than 500 needy people sat down for the 13th annual Christmas turkey luncheon at  Bonsecours Market on Sunday, a non-denominational  event that was started in 2002 by Father John Walsh when the priest was still a CJAD radio talk show host.

“One of my colleagues at the station, Carol Phaneuf, heard there were more than 20,000 people over the age of 60 living alone downtown,” Walsh recalled. “She came to me and asked whether we could have a dinner to feed 100. I said if we can do it for 100 we can do it for 500.”

The luncheon has become something of an annual holiday tradition in Old Montreal ever since. Tickets to the meal are distributed by the Old Brewery Mission, Sun Youth, the Action Centre and other charitable institutions.  Chef Tony Di Trapini, who cooked  the dinner, said the biggest challenge is finding the time to prepare it.  Hotelier Silvio Sicoli helped organize the event with the help of more than 100 volunteers who served the crowd.

Charles  Daguy, a cheerful panhandler arrived without a ticket but was fed anyway.  He had two servings of the turkey with cranberry dressing, and proclaimed the meal “wonderful, as good as anything they serve in a five star restaurant.  Father John, he is something special. “

A woman who asked that her name not be used said she lives on a fixed income, and could not afford to buy a turkey dinner. “It’s Dinner Kraft most of the time at my house, she said. “ This is wonderful.”

Everyone who left the dinner was given a gift of a pair of socks.

No Mother Teresa in Triplex Nervosa

Why is it so difficult to tolerate the faults of others? Have we forgotten that Jesus bore our sins?