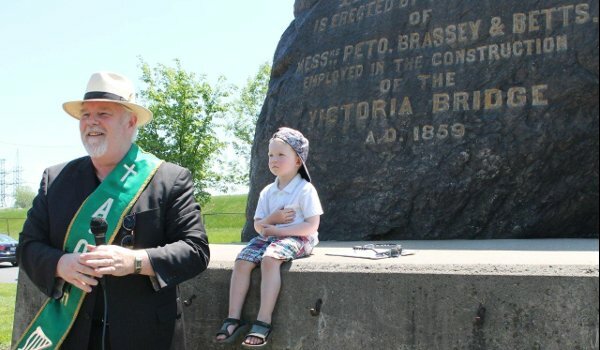 Plans were announced Sunday for a $25 million park and interpretive centre that would tell the story of the famine Irish experience in Montreal in 1847.

Victor Boyle, the National President of the Ancient Order of Hibernians, made the announcement during the annual Walk to the Stone on Bridge Street.

The Montreal Irish Monument Park Foundation Program is to be one of four famine commemorative projects undertaken in Canada.

The Black Stone, in the middle of a traffic island on Bridge Street, is said to mark the spot where 6,000 Irish immigrants lay buried. Fleeing the potato famine in their homeland, they died of typhus contracted aboard so-called “famine ships.”

The Black Stone was erected above the mass graves in 1859. Now the plans are to build a more fitting memorial south of the Stone in the parking lot at the corner of Bridge and Irlandais Streets near the entrance to the Victoria Bridge.

“We can’t sit in the middle of the road forever,” said Foundation director, Diana English.  “The time has come to create a commemorative park and pavilion to reintegrate the site into the life of Montreal and at the same time add an important missing link to the history of Montreal, Quebec and Canada”

The first hurdle is to get title to the property surrounding the stone. Canadian National Railways sold some of it to the city in 1988, but there are nine other title-holders in the area, including the Anglican Diocese of Montreal.

“Today is about the remembrance of what was a holocaust in Ireland,” Dr. Ray Bassett, the Irish Republic’s ambassador to Canada, told a crowd of about 100 that had walked a kilometre from St. Gabriel’s church to the Stone.  “It was a catastrophe: one million dead, one million fled. There are 30,000 bodies lying in graves across Canada.”

New Orleans Judge James Mckay, vice president of the Ancient Order of Hibernians of America, said he hoped the Black Stone stands for “ eons to come.”