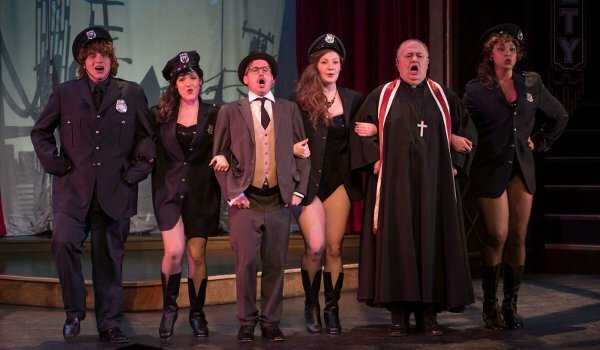 The Centaur Theatre's 2015-2016 season is drawing to a close with its final production of Last Night at the Gayety, a musical comedy by Bowser & Blue which runs until May 22nd at the Old Stock Exchange Building on St. François-Xavier Street in Old Montreal.
This vaudeville spectacle is based on the true story of crime-busting crusader Pacifique "Pax" Plante's efforts to shut down the city's bordellos, back-street betting establishments, burlesque clubs, and after-hours watering holes, between 1940-54. So, it's a fitting tribute that a play celebrating Montreal's infamous heyday is taking place at the city's oldest English-language theatre which is still packing them in nearly half a century later.
The Centaur began its stellar season in the fall of 2015 with The Adventures of a Black Girl in Search of God, a poignant story about the search for meaning in the wake of inconsolable loss. It was followed by Butcher - ironically, before Christmas - a gripping narrative about the horrors that so often accompany war in a season that is supposed to be about peace. The new year began on a lighter note with On This Day which deftly captured the tension between living the good life and living off the land. Then there was the acrobatic Bus Stops, a true-to-life story about the root causes of violence, so often overlooked when the official report comes down. Pillow Talk: An Essay on Dreaming, a visually stunning multi-media show, explored the inner landscape of dreaming. Last Night at the Gayety, Bowser & Blue's latest comical tour-de-force, complete's the line-up.
The dynamic musical pair of Rick Blue and George Bowser (Books, Music & Lyrics) has everything to do with the flagship Anglophone theatre's latest success. The renowned comedy duo has been entertaining Montreal audiences with their satirical songs that riff on Qubec politics and culture since the twosome first started performing before beer-swilling, spaghetti-twirling students at the former Peel Pub going on 4 decades. Over the years they have built up a following among theatregoers, beginning with hits like Blokes at the Centaur Theatre in 1992 - a hilarious take on Anglo angst in French nationalist Quebec - and culminating in the delectably charming Schwartz's: The Musical, at the Centaur in 2011, a take-off on Montreal's most famous delicatessen, Schwartz's Deli on St. Laurent Boulevard.
There are laughs aplenty in Last Night at the Gayety as we turn back the page to a time which was very different from our own politically-correct rule-bound reality, an era when gambling was illegal, police corruption was rife, and vice was both scandalous and glamorous. Coincidentally, the play is taking place while an exhibition exploring the same themes is on at the Centre D'Histoire De Montréal: Scandale! Vice, crime et moralité à Montréal, 1940-1960 which runs until December 30th.
The central conceit of the play turns on conjecture about the relationship between the crime-fighting lawyer and fabled Burlesque star of the Gayety, Lili St. Cyr. In the end Pax would be run out of town by the racketeers who profitted from Montreal's nortorious night life and the statuesque striptease artist would leave to make her fame and fortune In Las Vegas, only to eventually wind up broke in Los Angeles. As urband legend has it, she spent her latter years looking after alley cats.
The story of these unusual antagonists plays out against the backdrop of the fantasies, foibles, and foiled aspirations of a motley crew: on the one side, the proverbial rogues gallery; on the other, the vice-squad, spurred on by a citizens' morality committee, with a group of working-class heroes caught in the middle. However, the characters are all sympathetically drawn by the playwrights who don't take sides.
A cornball cliché for sure about Montreal's yesteryear, Last Night at the Gayety is ably directed by Roy Surette, the Centaur's Artistic Director. The multi-talented Daniel Brochu, who has appeared in previous Centaur productions including Balconville and Triplex Nervosa, steps right into Plante's shoes, making him an empathetic figure even in our own time. The long-legged, lythe Julia Juhas artfully reprises some of St. Cyr's most famous routines like the bath tub reverse strip, a clever ploy to avoid breaking the law.
Members of the large ensemble cast complement each other. The ever-versatile Holly Gauthier-Fränkel sings (and tap-dances) her heart out with her portrayal of Molly, a local starstruck girl from Griffintown while Jonah Carson is just right as Donald, her hapless suitor. Davide Chiazzese does a perfect send-up of Jimmy the gangster and Frayne McCarthy pulls it off as Tommy, the Gayety's huckster/manager. Tamara Brown effortlessly switches gears between various roles: Madame, Judge, and Peek-A-Boo Girl. Rosie Callaghan (Clarinet Player) and Shannon T. McNally playfully round out the trio of Peek-A-Boo chorus girls in the show's rollicking musical numbers.
Michel Perron came in for special mention on opening night for his portrayal of the affable Father d'Anjou when, speaking at an after-party, Surette said, "Don't you just love him? I'm thinking of re-instating myself in the Catholic Church because of him."
Last Night at the Gayety is pure entertainment. It's well worth the trek to Old Montreal just to see Juhas, a remarkable lookalike for St. Cyr in costume and blond wig, with her hight cheek bones and lissome movements. It's also a treat to hear her sing. Juhas has a wonderful voice, unlike St. Cyr, who purportedly had a squeaky one. For some old-timers, the clothes, the music, and - yes - the corny jokes - will surely be a trip down memory lane. For the rest of us, Last Night at the Gayety is a window on another time and place, peopled by vibrant characters, who are a part of Montreal's cultural heritage.

The love of God, which can look into the heart of each person and see the deepest desire hidden there, must take primacy over all else.