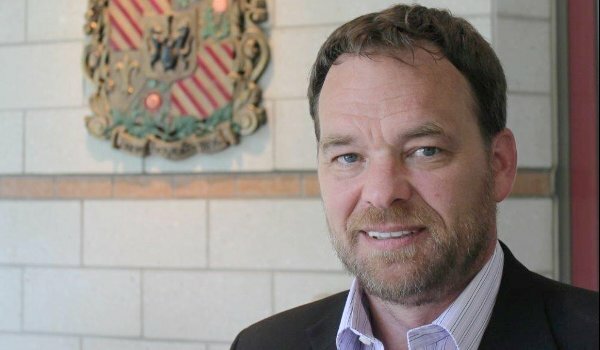 Paul Donovan, principal of Loyola High School in NDG, is leaving his post after nine years of service.

Paul Donovan the principal of Loyola High school who took the Quebec government to court for the right to teach religion and ethics from a catholic perspective will leave the post at the end of July. He will be succeeded by Richard Meagher, a former vice-principal and now director of the intermural athletic program.

“I spent a lot of my life here,” Donovan, 49, says matter-of-factly as he recaps his career.  He was a student at the Jesuit institution in the 1970s and 1980s, taught English, Social Studies and Theology there in the following decade, and has been Loyola’s principal for the last nine years.  A lawyer’s son, Donovan grew up in NDG and Mount Royal and obtained his education degree from McGill University.

In some ways, he  leaves Loyola more Jesuit than when it was run by the Jesuits.

“We are more focused on our identity, on what makes us different from other schools,”   he says.  “We believe that we are held accountable for what we stand for.  It is one thing to say, as all schools do, that the student comes first.

But it is quite another to say, as we do, that every person who comes here is a child of God  and their mission is to serve the world.  We don’t just get students ready to go out into the world, we get them ready to go out and change the world.   It is not about how someone else defines us. There is a more conscious effort being made at Loyola to recognize that we have our own mission.  It   takes great effort to do that, but a lot more of that is happening.”

Loyola was founded in 1896.  Among its many distinguished alumni are former federal finance minister Jim Flaherty, former Governor-General Georges Vanier and the latter’s internationally renowned son, Jean Vanier, who is the founding director of the  L’Arche communities for the severely handicapped.

Asked whether Loyola has future in an increasingly secular and often hostile society, Donovan is optimistic.  The school has an enrollment of 740 students, and each year has to turn down 150 admission applications.

“The key is to make yourself relevant to society. If you are having an impact by serving the common good in some way,  if you are touching people’s lives and enter into the humanity of people, if you do that,  you not only survive, but thrive.”

Donovan  leaves  at the top of his game  as principal and as a teacher.  He scores a 98 per cent approval on the on-line, Rate My Teacher a website, in which students grade their teachers.  The overall consensus is that:   “He is a great teacher, but he has to lose some of the bad,  sad, sad jokes.”

Donavon doesn’t know whether he will return to Loyola as a teacher after his one-year sabbatical from the school conclude.   Of one thing he is certain - he plans to walk the Camino Ignatio in Spain, the route that the founder of the Jesuits walked in 1522  when he wrote his Spiritual Exercises.

Donovan is also stepping down as President of the English Speaking Catholic Council and as Chair of the Quebec Association of Independent Schools. The big challenge for all Catholic institutions these days including Loyola,  he says, is to interact  with a changing world and at the same time stand firm on their Catholic foundations.

“We have two options:  As Catholics  we can  either hide in our shell so no one knows who we are, or we can reach out and let people see that what we believe in touches their lives.   It is our job to change the perception of the Church, not to complain about it.”

Last spring, 70 Loyola students travelled to the Dominican Republic to live with local families as a means of experiencing global community. Read details of their trip in the new issue of the Catholic Times.

And check out their video on YouTube at https://www.youtube.com/watch?v=Mox6Ysv9qjM