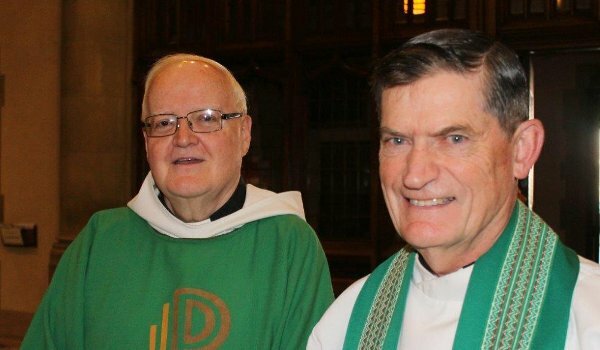 Msgr. Sean Harty and Father Pat Donnelly are retiring from active ministry after serving for the last six years Ascension of Our Lord in Westmount. As part of a series of forthcoming parish shuffles, Father Lawrence MacEachen, now at St. Malachy’s, is expected to be named the new pastor at Ascension.

Monsignor Harty and Father Donnelly have worked together as a team in three parishes on the Island during the past 22 years.

A Mass of Thanksgiving for their ministry at Ascension turned out to be an emotional farewell, which left both priests and several parishioners a little choked up.

In thanking the two, warden Don Taddeo said any one who had worshipped in any of their parishes would agree that, like Papa Bear’s bowl of soup, they were “just right,” – neither too hot, nor too cold.

Taddeo cited examples of their outstanding service at Ascension and noted the “grace and subtlety” with which they introduced the new liturgy to the church. He also praised them for nurturing a sense of community which not only brought parishioners closer together but heightened their commitment to help others in need.

“You have linked us all – children, families, seniors, ministers of communion, ushers, altar servers, and the choir into a community that serves a common purpose – pas facile – as they say in French,” he said.

Msgr. Harty, a former Episcopal Vicar of Montreal, came somewhat late to the priesthood. The son of Irish immigrants, he grew up in St. Henri and became a teacher with a degree in psychology from the State University of New York. Msgr. Harty held Master's degrees in Counselling Psychology and Education each, when he was invited to be a consultant at St. Mary's hospital for the SMH Foundation.  Over the years he held numerous administrative positions including Chief Operating Officer and finally as Acting Chief Executive Officer of the hospital. In 1989 he completed a Doctor of Ministry in Pastoral Pyschology from Notre Dame University.

While working at St. Mary’s he decided to study for the priesthood and, building upon his undergraduate degree in Theology from Concordia, obtained a Masters of Sacred Theology from the Seminary of the Immaculate Conception in Long Island, New York. Msgr. Harty was ordained in 1993. He left St. Mary's in 1996 and took up a position teaching systematic and pastoral theology at Concordia. He was appointed Episcopal Vicar in 2003, a position he held for seven years.

Father Donnelly came to Canada from his native Ireland in 1957 and taught school before joining the U.S. Air Force. He was ordained 36 years ago and was the pastor at St Veronica’s where the newly ordained Rev. Harty was assigned to work with him as his assistant. The two also worked together at St. Edmund of Canterbury and have been at The Ascension for the past six years.

The priests were given a photograph of the church and a gift. The presentation concluded with the Ascension of our Lord Choir, under the direction of David Szanto, singing God Be With You Till We Meet Again.

“Now I know what it’s like to attend my own funeral,” Msgr Harty joked. He said the occasion should be seen “not only a tribute to us, but a celebration of gratitude from us to you. Thank you for receiving us, thank you for responding to us.”