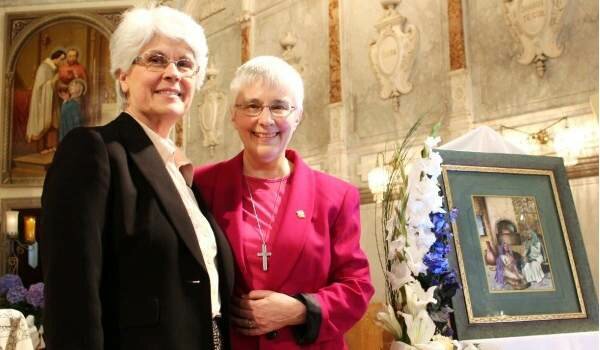 Sheila Sullivan heartily recalls the day 50 years ago when she became a nun.

Sullivan took her vows a member of the Sisters of the Congregation of Notre Dame with Danielle Dubois, who today is associate to the leader of the congregation, and with Maura McGrath, who went on to start the Refuge Jan Moreno for refugee claimants.

“In some ways, it feels like yesterday,” says McGrath. “It seems we had twice as many sisters back then. But I’m not afraid of the future. We have a new wave of talented, gifted and dedicated members in Africa, Japan and Central America. “

The three nuns were among 31 CND Sisters who celebrated 50th anniversaries on Saturday at Notre Dame des Bonsecours chapel.  The jubiliarians renewed their vows in the historic chapel in Old Montreal that holds the remains of their foundress, Saint Marguerite Bourgeoys. She established the uncloistered religious community in 1658.  Two of the jubilarians came from Japan, four from the United States, and there were 25 Canadians.

The Mass was concelebrated by four priests, Msgr. Pierre Blanchard, Msgr. Andre Foisy, Rev. Jean- Louis Larochelle and Rev. Guy  Chapdelaine.
In his homily, Father Chapedelaine reminded the nuns that their foundress held the Virgin Mary as a model.

“Marguerite Bourgeoys was truly blessed because she knew God personally and found her joy in hearing and obeying His word.  An early martyr once said that a Christian’s only relatives are the saints. Those who follow Christ enter into a new family, a family of saints here on earth and in Heaven. Our adoption as sons and daughters of God transforms all of our relationships and requires a new order of loyalty to God and to his Kingdom.”