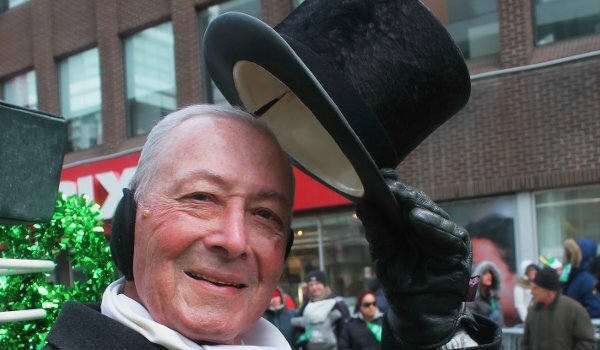 Donald Pidgeon, the longtime historian of the United Irish Societies and former President was a well-known community volunteer with a capacity for making and keeping friends. An amiable, gentle man, he was also a Navigator 4th Degree with the Knights of Columbus Council 284, served as a director of Catholic Community Services and could often be found serving at the St. Patrick’s soup kitchen.

Pidgeon was 79 when he died on February 8.

“He was a valuable resource who was most accommodating in his willingness to speak to students, community members and the media to educate them about the role the Irish played in the history of Montreal,” said Ken Quinn, former President of the United Irish Societies. “Our children and our children’s children will benefit from the knowledge he has shared with students and community members alike”

Donald Pidgeon the youngest in a family of four children was born in Montreal the same day that St. Brother Andre died – January 6, 1937. He often joked that Brother Andre, “saved me so many times, I can’t keep track.”

He grew up in Grifffintown and had a career in retailing. He joined the United Irish Socities in 1968, in 1972 became the organization's Recording Secretary and was elected President in 1978. He was a member of the Irish Committee for Grosse Isle in 1992, and largely through his efforts the Black Stone monument to the Irish famine was landscaped. For his efforts he was the Grand Marshall of the annual St. Patrick’s parade in 1994. (He was also Chief Reviewing Officer in 2013).

Pidgeon said his interest in the history of the local Irish community was sparked by stories he heard growing up. “The thing is, it was all oral history, there wasn’t much of it written down, so you had to depend on who was telling the story to know whether it was true or not. I wanted to know the facts and write them down, that’s when I got involved.”

He leaves his wife of 49 years, Nadia Ewasiechko, and their two children, James, in Australia, and Jennifer in London, England.