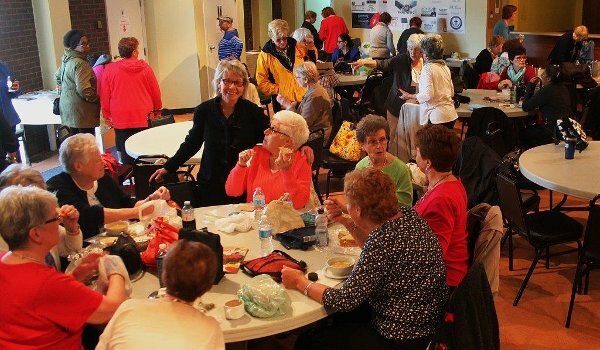 A grant from the Father Dowd foundation will enable the LaSalle 50 + community drop-in centre to remain open while it considers its options now that CCS has abruptly withdrawn its support from the facility.

The seniors have been meeting twice a week at St. John Brebeuf Church in LaSalle since the community organization was started five years ago.

Until now the former Catholic Community Services supported the administration and program development for the more than 400 registered members.  But since CCS decided to abandon its faith-based mandate a year ago and become Collective Community Services it has been developing its own program priorities.

In April CCS informed LaSalle 50 + it would no longer administer or support their program. “All in one shot, without any warning they dropped our co-ordinator’s position, and said they were getting rid of the club.  They told us they wanted to focus on youth programs and were no longer interested in funding seniors,” members of a steering committee that has been set up to keep  the  centre  running told VMO.  “CCS pulled the rug out from under us.  Without their support we no longer really legally exist. There is no official anything.” According to a former CCS official, Lasalle 50 + was advised four years ago that Centraide would not support the group, and that they would have to become self -upporting as there was no money in Centraide’s budget for seniors..

To ensure that the drop-in centre is able to continue, at least for another year until it gets its bearings, the Father Dowd Foundation announced this week it will offer short term financial assistance.

“LaSalle 50 + is a vibrant community group which supports seniors in the area,” explained Patrick Gillespie, President of the Dowd Foundation’s board of directors. “When CCS cut them off we held an emergency meeting, sent out notices to everyone, and agreed to give them $4,000. That guarantees them a year’s income,  until they get on their feet.  “

The money, according to former administrator Diane Doonan, will help “stabilize and formalize” the centre.  Board member Andy Malolepszy says that on the days when the centre is open, the place is packed. “For many people in LaSalle who speak English this place has been a godsend. These people need a place like this to come together. It is needed as a recreational facility and in terms of socializing. We can’t afford to lose it.”

A steering committee has been formed to consider whether to integrate LaSalle 50 + with another group, operate it under another name, or obtain its own charitable status.  Another possibility is that it could come under the auspices of a new Catholic Action program that is in the process of being organized  to fill the vacuum created when Catholic Community Services became Collective Community Services and moved to Verdun.