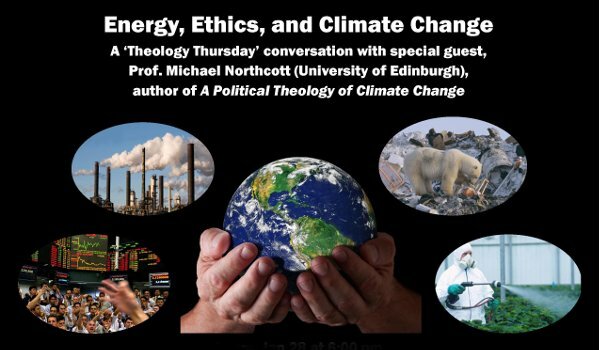 On Thursday January 28th, the Newman Centre welcomed Professor Michael Northcott for a special edition of its ‘Theology Thursday’ series. The topic, "Ecology and the Ethics of Christian Stewardship," drew a crowd of 50 students, faculty and community members representing diverse fields, including environmental science, political science, environmental law, and ethics. Michael Northcott is a professor of ethics at the University of Edinburgh in Scotland, and is deemed a leading environmental theologian and ethicist with significant research and ground-breaking publications in the field.

Professor Northcott made an ethical case against the use of tar sands oil, citing destructive impacts on Albertan watershed, land and soils. Furthermore, he says there are human health impacts from working in the area, as well as diverting funds away from jobs relating to renewable energy, amongst other things. "Long term costs of tar sands will create permanent deficit in Alberta while current low tax regime undermines democracy," he argued.

Stewardship becomes a moral priority because it is those who are too poor to protect themselves against floods, soil erosion, desertification, rising sea levels, and declining water suppliers that suffer the consequences, and because the poor are persons like us, they have a claim on us. Approaching the problem of climate change from the viewpoint of Christian ethics, Northcott said: "The Parable of the Good Samaritan suggests individuals have duties to relieve suffering they did not cause". He also cited the Papal encyclical Laudato Si. "Pope Francis argues that the human economy and the technologies it mobilizes must be radically redesigned to match the law-like characteristics of the earth since these are God-given and scientifically evident."

There have been both strides forward and setbacks in efforts to reduce global emissions and to opt for renewable energy sources. According to Northcott, addressing climate change on a global level involves striking international agreements on fossil fuel production, tax shifting (especially in the corporate world), imports, and of course hope. In this transition, the leadership of developed countries, such as Canada, the United States, United Kingdom and Europe are a key to reaching any significant reduction in carbon emissions.

Northcott’s presentation fell on the eve of Montreal Mayor Denis Coderre’s statement on February 1st about municipal policy on reducing carbon emissions following citywide consultations known as vertMTL. Coderre criticized TransCanada Corporation for not presenting him with any information on future plans.

According to Northcott, we are not achieving our goals because our collective will regarding the use of fossil fuels and other wasteful technologies hasn’t really changed.

Failure of law and regulation to remedy international injustices of climate change calls for an ethic of love, which is a moral duty for all Christians.