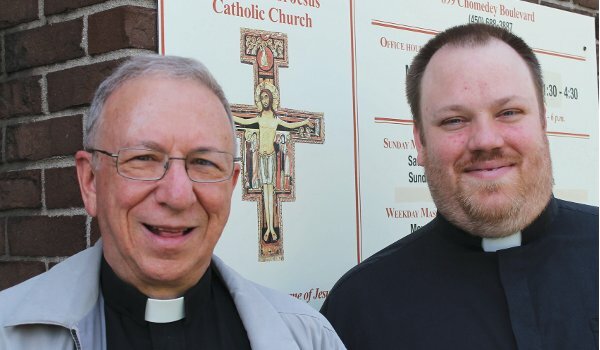 The parish of Holy Name of Jesus in Laval will experience a dramatic change this fall when both its priests, Father Peter Sabbath and his assistant, Father Jason Piper, will be replaced by two priests from Chicago with the Third Order of Carmelites, who will be establishing a house in the city.

Father Sabbath is going to St. Thomas a Becket in Pierrefonds as a replacement for Rev Marco Guzman, who was reassigned in May; Father Piper, to Our Lady of Fatima in Ville St. Laurent where he will join Bishop Thomas Dowd, who will be the pastor.

Father Sabbath, who was only the second parish priest in 50 years at Holy Name of Jesus, is a convert to Roman Catholicism.

He was born into a Jewish family and as a boy attended Shaar Hashomayim Synagogue in Westmount. His father was Lawrence Sabbath, an arts reporter with Montreal Star and the Gazette.

Father Sabbath’s interest in Christianity was piqued by the movie, The Robe, based on a novel by Lloyd C. Douglas about the crucifixion of Christ. He attended Boston University, studied at Concordia, then went to Vancouver where he toyed with Buddhist teachings. It was during a Mass at St. Joseph’s Oratory that he became convinced that Christ was present in the Eucharist.

“I was there with a friend at Mass. The priest didn’t seem too interested in what he was doing, and I almost got up and left, but decided to stay,” he says. “At the moment of consecration, when the priest raised the bread and said the prayer, I just knew that this was the body of Christ at that moment. I felt something change within me. After Mass I got up and said, ‘well, I’m Christian now. I believed at that moment, and it stayed with me.’”

“I don’t feel I have abandoned my Jewish faith,” Father Sabbath has said, “I feel I just went deeper into it.”

He began his ministry at St. Edmund of Canterbury in Beaconsfield and was a curate at St. Patrick’s for several years before being appointed to Holy Name of Jesus.

“I have lived here longer than anywhere else in my life,” he says. “I came to work with Father Colford 13 years ago, so of course I am going to miss it. But we are here to serve. The bishop tells us where the need is, and we go.”

Father Sabbath is serving a second term on the Presbyteral Council, was assistant to the Episcopal Vicar for Cultural and Ritual Communities from 2005-2008, and is perhaps best known within the Montreal Archdiocese as the organizer of the annual Corpus Christi celebration. He will be assisted at St. Thomas a Becket by Rev. Tijo George, a recent arrival from India.

Father Jason Piper, the youngest of two boys in a blue collar family, is no stranger to Laval . He was baptized at Holy Name, made his first communion there, attended Laval Catholic High and celebrated his first Mass in the church. By his own admission when he was in his teens he “kind of lived my life as a pagan. I wasn’t a practicing Catholic.”

He was working as an apprentice electrician when he had a conversion experience but initially thought he was doomed to Hell because “my whole life up until then I didn’t acknowledge Him.”

He began reading biographies of the saints and their relationship with Christ and learned of the power of Christ’s forgiveness. He is especially devoted to a Polish nun, St. Helen Faustina of Divine Mercy.

He began his ministry at St. Patrick’s as a parochial vicar, and has only been at Holy Name of Jesus for two years. Father Piper is taking the move in stride.

“To be honest, it comes with the job. It may hit me when I have to pack in August, but if you are a young priest, you know you are going to be moved sooner or later.”