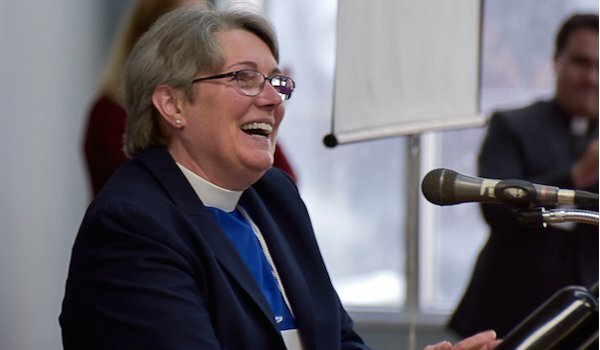 Montreal Anglicans will experience a summer of significant change when the local diocese comes under the leadership of its first female bishop.

However, Bishop Elect Mary Irwin Gibson, who refers to herself simply as "Mary," doesn't see her new episcopal role in terms of gender, much as others might view it this way.

She says she simply answered a call to serve, first as a priest, then as a bishop, and so she let her name stand for election.

"I definitely feel called by the Holy Spirit to this ministry in Montreal", she told VMO, even if what that will look like is not entirely clear to her.

Irwin Gibson, elected by clerical and lay delegates in June, will replace Bishop Barry Clarke when he retires this month. Irwin Gibson will be formally consecrated and installed at a ceremony in Christ Church Cathedral, the mother church of the Montreal Anglican diocese. The ceremony will take place in late September on the Feast of Saint Michael and All Angels.

When Irwin Gibson was elected June 6th, she told delegates she has "a heart for justice in society and for ecological issues."

Over her 34 years as a priest, she has served in several parishes, including rural and inner-city ministries. Her last stint as a pastor was in Quebec at Holy Trinity Church in Saint Agathe from1991 to 2009. Currently, as the Dean and Rector of St. George's Cathedral in Kingston, she continues to participate in what she refers to as "shared leadership", a core value of her vision for episcopal ministry.

The ordination of women is nothing new in the Anglican Communion although it has its detractors among Anglicans, as well as a staunch opponent in the Catholic Church. Some Anglicans were so upset by the issue of female ordination a few years ago that they asked to join the Catholic Church while retaining certain aspects of their Anglican tradition, prompting Pope Benedict XVl to create a new structure for them called personal ordinariates.

At the Anglican decennial Lambeth conference in Rome, Cardinal Walter Kasper, the cardinal in charge of the Pontifical Council for Promoting Christian Unity, said that Rome cannot abide "alien traditions" such as female ordination.

"The Catholic Church finds herself bound by the will of Jesus Christ and does not feel free to establish a new tradition alien to the tradition of the Church of all ages."

Women have held top positions in the Anglican Church for some time since the first woman bishop was elected in the U.S. in 1989. The ordination of women as priests goes back to 1976. Data from the Pew Research Centre for 2012 shows that only 11 per cent of American congregations are led by women, due at least in part to continued resistance to the idea of women being ordained.

Gender politics aside, the new bishop is committed to finding ways "to be the Church" by building fellowship ties with other Christian denominations and by partnering in mission with the greater interfaith community.

"I am interested in our ability to interact and share the gospel wherever we may find ourselves and in building up the hope and faith of the Christian communities that we have," she says.

In her new role she will be ministering to both anglophones and francophones. She says that while she hasn't exactly been a refugee from the Quebec political scene these last six years at St. George's - she acknowledges that she's been hearing things about opposition to crucifixes and hijabs - she knows that her current reality is a world away from the often emotionally charged landscape of Quebec.

She imagines there will be strong advocates in the local Anglican Church pressing her to take a leadership role in advocating for religious groups and minorities once she arrives and, owing to the democratic and consultative style of leadership of the

Anglican Church, people will expect their bishop to be involved in wider social justice issues. But she will focus on being a bishop first before defining what her role might be in the larger context.

She will have her work cut out for her when she assumes the reins of administrative leadership in the Montreal Anglican Diocese. Church rolls show it has only about 11,000 members, less than one-third of the total membership 40 years ago.

She will have to make some tough decisions about whether to sell or re-use vacant or near-empty churches.

Her collegial approach stressing "partnership in ministry", coupled with an executive MBA from l'Université du Québec à Montréal (UQAM) with study focused on the Church and its future, will likely prove to be invaluable assets in helping her to steer the local Anglican community in finding ways to meet its financial challenges in a changing spiritual climate when church attendance is down in many denominations.

One of the ways the Montreal Anglican Diocese has already been looking at to strengthen its presence is by engaging the local francophone community.

Over the years, Irwin Gibson has worked on a number of francophone committees at the provincial level so she is well suited

to reflect the Anglican community's bilingual reality in cosmopolitan Montreal.