Pillow Talk: An Essay on Dreaming 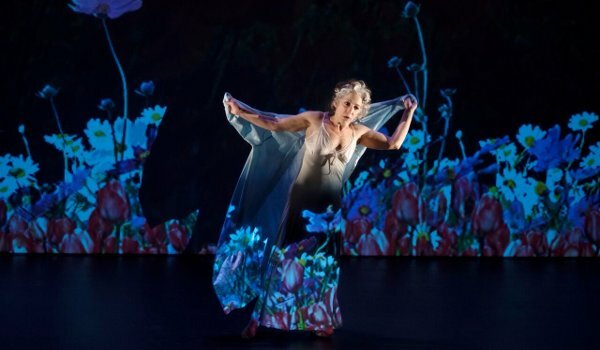 Pillow Talk: An Essay on Dreaming by Dulcinea Langfelder playing at the Centaur Theatre until April 24th is about something we all do, but take for granted - dreaming. This one-woman show, co-created with Anne Sabourin (staging & choreography), features Langfelder artfully interpreting her own dreams on stage through voice-over and dance as she interacts with vivid video animation (Benjamin Broche & Patrice Daigneault) which conveys what is going on in her subconscious mind. The mysterious realm of dreams is further brought to life by brilliant lighting effects (Vincent Santes) and a stunning soundscape (Danys Levasseur) which transport the audience into the artist's staged dream world.

As in actual dreams, Langfelder's dreamscape is a kaleidoscope of different images, fragments of conversations, non-linear story lines, and sometimes weird (and funny) juxtapositions of ideas - a swarm of bugs and sausages - which evoke a wide gamut of feelings, ranging from joy - taking a mischievous romp with Obama through the White House - to sorrow - rocking her dead father's oversized head - to fear - gangsters are after her - to regret - why did she do that to the cat? - then back again as she time-travels between buried childhood memories - images of her family projected onto a screen backdrop - and her present-day adult realities - the guy she went out with whom she rationalizes didn't really dump her.

When we sleep we may defy gravity in our thoughts, span continents in a single bound, plunge deep into the ocean or abyss, or soar through the sky in fantastical movie-like sequences. So too, it is in Langfelder's re-creation of her own dreaming states. On stage she moves fluidly, at times emulating the tossing and turning that so often accompanies non-restful sleep. At other times, she lies peacefully on the stage floor cradling her pillow. In one sequence, suggesting an apparition in the spiritual realm, she is enveloped in a luminous blur of lights.

It's no secret that some people talk when they sleep, especially in moments of so-called "lucid" dreaming. In these instances, half-articulated questions, heartfelt longings, burning desires, and all the detritus that is part and parcel of the dreamer's daytime world may come floating to the surface and manifest into consciousness. So too, it is with Langfelder who often has a few good laughs at herself when she is dreaming.

In Langfelder's vision of dreaming, we do deep work on ourselves, exploring the meaning of our existence and the truth about the world we live in. One discombobulated dream sequence appears to exist in some parallel universe to the American Dream writ large. In one strand, dredging up Rev. Martin Luther King's image, faintly echoing his famous words, we hear him say, "I have a dream ...", but the words trail off. Then, Langfelder is trying to remember where Jesus went - someone thought it was all a big joke - except that it's not so funny. She struggles to make her way out of the "hell-bed" to a better bed in a room of many beds, but it's not that easy. And the ghost cat keeps making its rounds through her dreams, haunting her.

Coincidentally, the play, along with an art exhibit on dreaming at the Centaur Gallery, are taking place in tandem with the recent launch of news magnate Arianna Huffington's new book The Sleep Revolution, documenting the therapeutic benefits of sleep for mind and body.