St-Raphael: The Parish that Refuses to Die 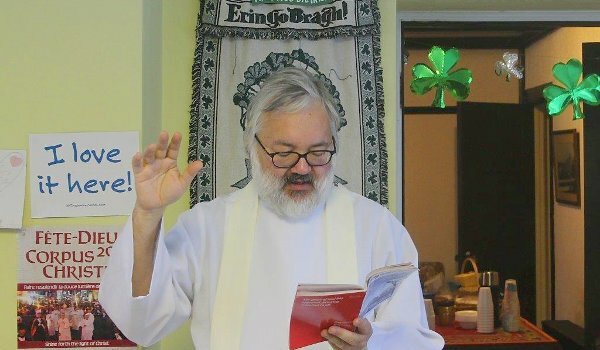 Even though the parish of St. Raphael's closed seven years ago, about two dozen faithful gathered in what was once the boardroom of the now vacant old church building in Outremont for a mass to usher in the New Year. The church may be closed, but a small group of parishioners refuse to let their parish die.

They get together for an intimate prayer service or mass every other week or so. The service is tailor-made for the congregation who bring a pot-luck brunch and participate in choosing what hymns will be sung, what the intentions might be, and even provide the wine for communion - a bottle of Beaujolais is not out of the question!

"We make do with what we have," explained Paul Kipens, who conducts a lay service at St. Raphael's every other week or so. "We are a support group, we encourage one another, we all know one another, we pray for each other. If you believe in miracles - and I do - I believe prayers are more effective when you pray for someone else instead of for yourself. I think groups like ours are the future of the church, small groups who might feel disconnected or isolated in a bigger church, worshipping together as a family. I feel we are heading that way."

Rev. Joe Mroz, (pictured above) a Jesuit who had been ministering to the congregation on a part time basis until he moved to Newfoundland last fall was back in Montreal over the holidays to celebrate the mass on the Feast of the Epiphany. "When the congregation asked me to do ministry about six years ago, it was always going to be temporary. But I kept coming back. The community is wonderful. They have a heart here for people who need help. "

St. Raphael the Archangel was built in 1930 by its founding pastor, John O'Rourke, to serve a well-heeled English-speaking congregation in Outremont, a predominately French-speaking neighbourhood. From the day it opened until O'Rourke died in 1975 St. Raphael's was one of the richest parishes in the Archdiocese. But church attendance had already begun to decline by the time O'Rourke died and Robert Harris, now the bishop of St. John, N.B., became pastor.

"Father O'Rourke had been the big drawing card," Harris recalled. "Everyone knew him and he knew everyone by name. A good number of those who came to Mass when I was pastor were mainly outsiders who kept returning out of loyalty to O'Rourke - who had married them and baptized them, buried their parents and their relatives, and then married many of their children."

The election of the Parti Québécois, a sovereigntist government, in 1976 contributed to the initial decline as a number of parishioners moved out of the province. Then, as the remaining English-speaking Catholics who were raised in Outremont became increasingly bilingual in the 1980s they no longer felt the need to be ghettoized. A number left to worship at St. Madeleine's or St. Kevin's parishes which are both nearby. A succession of priests soldiered on at St. Raphael's before Gerry Sinel became pastor in 1990. Sinel had been a chaplain at St. Mary's Hospital several blocks away and he brought a number of the hospital staff - doctors and nurses and orderlies - with him to the church. Through the sheer force of his personality Fr. Sinel managed to build almost a cult following and the church remained open for another 17 years. But the 50 or so parishioners that were left were barely able to maintain the property.

When Fr. Sinel died in 2007 the Archdiocese closed St. Raphael's and leased the building to a Palliative Care Residence Board which has yet to convert the church into a hospice. The parish still has a board of wardens, and parishioners continue to get together and socialize. "We are like a family. Fr. Sinel made us feel like a family," said Mary Stanton, who has been going to St Raphel's for more than three decades. "Father Sinel is dead, they closed our church, but here we are. St. Raphael's is still here."