The Son Rises at Bishop’s 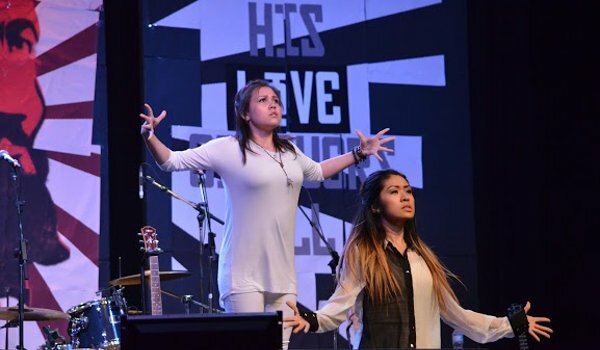 In his famed “Last Lecture”, the late Prof. Randy Pausch talked about learning through head fakes: you don’t send out your kids to learn football per se, you want them to learn more important things, like teamwork and perseverance. This past weekend’s Couples For Christ-youth Eastern North American Conference had to be one of the biggest head fakes of them all.

From July 17 to 19 more than 700 youths, aged 12 to 21 from the Eastern U.S. and Canada gathered at Bishop’s University for a “Love Revolution.” Delegates participated in various catechetical sessions and workshops, creative and sports competitions, praise and worship segments, and daily mass.

Sounds straightforward enough, right? While on the surface national pride was on the line at the sports meets – Montreal won the Junior-Men’s basketball tournament – and the delegates expected to learn something new during catechesis, what made the youths open their minds and hearts the most was their encounter with each other.

Delegates did not just meet new people and make new friends. They met brothers and sisters who are from different cities, even countries, yet are part of the same global community, who share the same faith and go through the same problems. They experienced first hand that to be excited for Jesus, to be enamored with His person and teaching, and to be on fire for His mission, is not only cool but is actually a normal way of life. The interaction with their peers and having them experience a foretaste of a Heaven together was the real Love Revolution.

This was evangelization for the Web 2.0 generation: crowd sourced evangelization. Sharing one’s faith is no longer just at Bible study nights; this event was evangelization using the audience’s own language. CFC-youth extensively used Snapchat and Instagram, and other social media platforms to promote the event, but also to ensure a steady stream of content during and after – allowing those present or away to fully share in the experience. And with the hashtags #LoveRevo2015, #LoveRevolution and #TheSonRisesInTheEast, the delegates were encouraged to do the same: becoming themselves promoters and evangelizers, by either reposting official content or making and posting their own – a model intended to be brought back to their local communities to continue the Love Revolution.

Catechesis sessions focused on opening minds and hearts, to empower youths to proclaim the Good News. No punches were pulled as they touched on current topics in youths’ lives today.

The first session was about superficial fulfillment, false scarcity, and false abundance. Teens shared about loneliness and love life: struggling with constantly wanting more from the world, and about constantly seeking love and affection from others – only to reaffirm that the only true necessity is God.

The second session was a “Declaration of Dependence” on Christ. The highlight was the compelling sharing of a young woman who detailed her struggles, since the age of 16, to fit in and to find herself. She grappled through anxiety and bulimia, fought with emotional numbness — resorting to self-mutilation to feel again – only to rely on drugs, sex, alcohol and partying to maintain her euphoria to escape her reality. The session taught that whether it is at the highest point in our lives, or the lowest, Christ chooses to walk with us, as His love is constant. He will always meet you wherever you are.

Workshops – two of which were given by Mission Jeunesse members Jessica Jalea and Terrel Joseph – focused on evangelization through servant leadership and effective marketing, on chastity and living 100 per cent free in an age of 100 per cent indulgence, and on disturbing one’s own heart to go out and meet the poor with compassion.

The third and fourth sessions were about the response to God’s invitation and His love for us. As the weekend wound down, the youth learned of the necessity to come down from the mountain, leaving behind the safety and the joy of each other’s company, to bring the Good News to their communities and neighborhoods.

However, the biggest revelation was the amount of talent our youth have, and how we grossly underestimate them. On par with any event like the Jazzfest or the Oscars, this was a full-scale production: staging, lights, sound, projections, dance routines and bands filled the main venue for sessions and worship concerts, coupled with the coordination of all the other competitions and workshops. Yet, this was run, led, choreographed, and animated mostly by high school and university students, many of whom can’t even drive a car yet.

This weekend gave us a glimpse of the Church of tomorrow. She is alive. And thriving.

All photo credits are attributed to: @Couples For Christ Inc. 2015

For more photos and resources:

And finally - a pie eating contest!