Should Trudeau be Denied Communion? 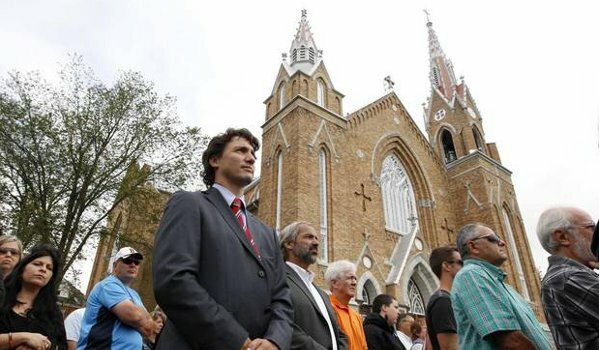 Ottawa's Auxiliary Bishop Christian Riesbeck has warned that there is a possibility that Canon Law 915 could be enforced against Justin Trudeau to deny him Holy Communion if he does not back off his decision to ban pro-life candidates from running for nominations to represent the Liberal Party of Canada in the next federal election.

Canon Law states that those who are "obstinately persevering in manifest grave sin are not to be admitted to Holy Communion.

"Out of concern for safeguarding the reverence that is due Our Lord in the Eucharist and to avoid scandal, one could possibly apply this norm even in the case of a pro-abortion Catholic politician who is extremely vocal about his position."

With an election looming on the horizon, Trudeau may find that there is more at stake to winning elections than simply glad-handing on the barbecue circuit or wowing the crowds with his dance moves at Pride parades, and that neither his celebrity status nor famous legacy buy him a free pass as a Catholic from the Church's moral authority.

Bishop Riesbeck's comments were made after several Catholic bishops denounced Trudeau's undemocratic decision last May to weed out all but those with the most hard-line pro-abortion views, ranging from so-called 'consistent' pro-lifers who would ban abortion altogether to those who simply want to arrive at a better balance on the abortion issue by implementing informed-consent laws or parental notification (in the case of a minor seeking to have an abortion), as well as by setting limits on abortion based on the gestational age of the fetus.

The Liberal Party is a pro-choice party, but its support for the status quo on abortion has never been packaged as opposition to free speech. Members of Parliament enjoy the same first rights to freedom of conscience, religion, and free speech under the Canadian Charter of Rights and Freedoms as all citizens and so can't be legally compelled by their party leaders to vote a particular way on any issue, an obvious reason why prospective candidates are being screened to eliminate those with anti-abortion views before they are elected and can assert parliamentary privilege to vote their conscience.

Trudeau's pronouncement came as a shock to Catholic Liberals because of the historic link between the Catholic Church and the Liberal Party, raising questions in the minds of many about what else might be impermissible to discuss in the very chambers where democracy is supposed to flourish in the Parliament of Canada.

To add insult to injury, Trudeau's coincided with a statement by the Catholic Organization for Life and Family calling for the reopening of the abortion debate. In its latest publication, “The Unborn Child: a gift, a treasure and a promise,” COLF describes respect for life as a “gauge of civilization” and warns that when the right to life is not fully protected “other rights are sooner or later mocked.”

It blasts the myth that the Supreme Court of Canada established a “right to abortion” when it struck down Canada’s existing abortion laws. “Instead it created a legal vacuum, leaving it to future parliamentarians to create a new law recognizing the humanity of the unborn and protecting their right to life.”

COLF urged a reopening of the abortion debate in Parliament, calling for publicly funded services to help women find alternatives to abortion. It also called for a “radical transformation” of social and corporate attitudes so that women can both be mothers and pursue careers.

Trudeau is catching flack on all sides, including from other Liberals. On Sept. 18, seven former Liberal MPs published a letter condemning Trudeau for his undemocratic edict that pro-lifers would not be able to seek nominations to stand as Liberal Party candidates and that sitting MPs must vote for abortion if a bill on the issue comes before the House of Commons.

Among this group of seven is Pat O'Brien (London-Fanshawe, 1993-2006) who quit the Liberal caucus over former Prime Minister Paul Martin's decision to force Liberal cabinet ministers to support same-sex marriage.

The letter decries the fact that Liberal candidates would have to "park their conscience at the entrance to the House of Commons and vote directly opposite to their beliefs."

It asks how Trudeau's intractable position on abortion might impact debate on other contentious moral issues such as euthanasia or human cloning.

"if your order is not rescinded, it will stand as a precedent for you, and future Liberal leaders, to issue similar edicts on other moral issues."

The letter concludes: "As Liberal leader, we urge you to return to democratic principles and sensible Party tradition and rescind your ban on people who hold a particular moral belief, from running for the Party, unless they agree to do exactly as demanded by you. How can such a discriminatory policy serve the democratic ideals of our great nation?"

However, Trudeau remains unfazed by the criticisms of these veteran Liberal MPs.

Recently, he responded to their letter on Twitter: "The days when old men get to decide what a woman does with her body are long gone. Times have changed for the better."

(Pierre Elliott Trudeau was 63 when he brought in the Canadian Charter of Rights and Freedoms. During the Charter debate he sent a letter to Catholic leaders saying that it did not create a right to abortion.)

Appearing on CBC's The Sunday Edition the week before, Trudeau told host Michael Enright that defending abortion trumped the rights of MPs to vote their conscience, claiming that abortion is in the Charter of Rights, which it isn't.

Justin Trudeau has not only ramped up the Liberal Party's more moderate pro-choice view to bring it into line with his own more militant pro-abortion stance, he has taken it upon himself to bring Catholic opinion into line with the new Liberal credo, usurping the bishops' mantle in the process.

In the wake of an earlier backlash from within the Liberal Party Trudeau sent out an e-mail to all party members advising them that there is no contradiction between the party's policies on abortion, homosexuality or other moral issues and Catholic teaching, citing his late father Pierre Elliott Trudeau as an ultimate arbiter of the truth.

"I had an extraordinary example in a father who had deeply held personal views that were informed by the fact that he went to Church every Sunday, read the Bible regularly to us, and raised us very, very religious, very Catholic," he said.

"He too held fast to his beliefs, but he also understood that as leaders, as political figures, and as representatives of a larger community, our utmost responsibility is to stand up for people's rights."

The misuse of his office as leader of the Liberal Party to fudge the differences between Liberal Party policies and positions adopted by the Canadian Conference of Catholic Bishops amounts to nothing less than a breach of the division of Church and State, a relationship that cuts both ways with respect owed to the Church's autonomy in matters of faith and morals. To date, neither has the CCCB asked for a retraction nor the Liberal Party offered to publish one.

It would appear that the leadership of the Liberal Party is standing behind Trudeau's controversial decision - without explicitly defending the overreach of his authority as party leader. Recently, top Liberal Party strategist David Herle appeared on CBC's The National Insiders Panel attempting to portray the selection of candidates by internal party committees - in this case to prevent pro-lifers from applying - as a normal democratic exercise, which it is not.

Here's what Trudeau and members of his entourage don't understand: democracy is bottom-up, not top-down. In a democratic party structure the members at large choose the people whom they want to represent them: candidates are 'elected' by party members based on a free exchange of ideas; not 'selected' by committees with predetermined views.

And while party leaders have the right to vet candidates, this can only be done for valid reasons: for example, to prevent someone with a criminal record or who isn't a Canadian citizen from running in an election and must be done in a manner that is in compliance wiith the Canadian Charter of Rights and Freedoms, certainly never to override these very rights which are at issue here.

Do we say “Thank you” to God every day?